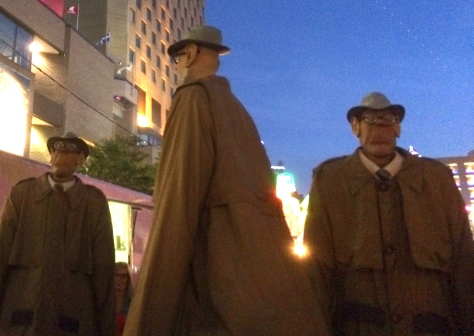 To our great distress my wife and I had been summoned down to Florida for one of my mother-in-law’s frequent family affairs. Technically, she was my stepmother-in-law. After my wife’s mother died her father had remarried to the “Tugboat,” a massive figure who steamed along pulling everyone in her wake. My wife couldn’t stand the woman, so I had driven down here alone, to get away from the cold and snow for a few days and to “show the flag for our side.”
It was my first visit to their new apartment in a retirement compound, which Tugboat had berthed them in after convincing my father-in-law to sell the house he had lived in with my wife’s mother since they retired to Florida some twelve years ago.
“Ugh! You smell bad, John,” Tugboat grunted at me as a greeting when I arrived. “Go take a shower.”
My reminding Tugboat that I had just driven twelve hours to get here from my last motel stop, one of two overnights, cut me no slack. When Mother Tugboat speaks, you do what you are told.
I pushed open the bathroom door. The room was small, dirty and
crowded with ‘stuff,’ including my father-in-law standing there in his underwear.
“You can’t come in here yet, John,” father-in-law insisted. “I’m not finished shaving. Go sit out on the porch.”
As I had stripped down and only had on my boxer shorts, he handed me a white bathrobe and a pair of Tugboat’s pink bunny slippers, and pushed me out a side door, saying, “I’ll call you when I’m finished.” I stepped out onto the empty porch and sat down in one of the empty chairs.
“Can I get you something, sir?” a man, dressed as a waiter, who had suddenly appeared asked. “I’m sorry; I didn’t know anyone was sitting out here.”
“Sitting where?” I asked.
“Sitting on this porch, this is the porch for the hotel,” was his curt reply.
“What hotel?”
“The hotel you’re staying at.”
“I’m not staying at a hotel; I’m staying at an apartment . . . through that door.” I said pointing.
“But there is no apartment through that door,” he the waiter explained.
To prove the waiter wrong, I knocked on the door; “It’s me, John. . . .”
“I’m not finished shaving yet,” my father-in-law shouted out. “Very good, sir,” the waiter said politely and went away.
Several people passed along the sidewalk, some eying my costume of white bathrobe and pink bunny slippers with interest. Curious myself as to where I was, I walked around the corner of the porch to the front entrance.

“May I help you, sir?” a man behind a reception desk asked.
“Oh, not really, I was just trying to find out where I was.”
“You are in the lobby, sir.”
“The lobby? . . .”
“Yes. Would you like a room, sir? We have a special rate today, only $199 for a single.”
“No thank you, I am staying in the apartment around back,” I informed him.
“But there is no apartment around back, sir,” he assured me.
Not wanting to argue, and perhaps questioning my own credibility, I went and pounded on the door I had just come from.
“I’m not finished shaving yet,” my father-in-law shouted again.

I wondered what he was shaving that was taking so long—perhaps his whole body.

A couple came out from the hotel and hailed a taxi. The driver, who had been parked out front with the motor off, got out, handed them a length of white rope and got back in. The two tied the rope to the front bumper, and then, slinging it over their shoulders began to pull the taxi forward. When they got it up to enough speed, the taxi driver popped the clutch and the engine started. The couple untied the rope, returned it to the driver, and got in. The taxi drove off.
I sat there for some time wondering about this. Then another taxi drove up and parked and the process was repeated. All in all I saw this happen three times in approximately half an hour.

“The dining room is open now, sir,” a waiter announced, a different person than had come around before, a Hispanic. “We have a special today, the roast beef is only $22.”
I was tempted, being hungry, but I didn’t have $22 on me, and Tugboat had promised us a slap up dinner. “No, thank you,” I said. “I don’t believe I’m dressed for dinner.”
“It’s not a problem, sir; our dining room is very casual; a white bathrobe and pink bunny slippers would be completely acceptable.”
“No thank you,” I repeated. “I am having dinner in that apartment back there.” I pounded on the door.
“I’m not through shaving yet,” a familiar voice replied.
A short time later yet another waiter arrived. “Do you have a dinner reservation, sir?”
“No.”
“Are you waiting for a taxi?”
“No.”
“Are you a guest at the hotel?”
“No.”
“Then you can’t sit here in a white bathrobe and pink bunny slippers.”
“No?”
“No!”
“But just a while ago it was okay to go into the dining room in a white bathrobe and pink bunny slippers.”
“That was then, sir; the rules have changed.”
“I didn’t know,” I apologized.
“Haven’t you been listening to the public address announcements?”
“What announcements?”
Just then there was a squeal, and the blare of a loud speaker: “It is not allowed to sit on the porch wearing a white bathrobe and pink bunny slippers.”
“You have got to leave, sir.”
I pounded on the door. “Father-in-law! If you’re there you’ve got to let me in!”
“You’re in luck, I’ve just finished shaving,” was his welcome reply, “and dinner is just about ready.”
The small apartment was full of people, all wearing white bathrobes and pink bunny slippers. They must have arrived through some other door as I had not seen them come across the porch. Half of the men were male versions of the Tugboat, in various sizes and shapes, while half of the women were female tugboats. The rest of the crowd was made up of river barges, ferry boats, skiffs, and scows.

“I’ll make the salad,” said a little female tug.
“I’ll do the desert,” added a medium lady barge.
“My children are so wonderful,” beamed Mother Tugboat as her family backed and filled around her. And the sons were not idle either. ”
“I’ll convert the basement into a game room while dinners cooking,” said one.
“The roof looks a little ragged,” declared another,” I should be able to get a new one on before it’s time to eat.”
“I could put on a new overhead garage door and still have time to mow the lawn,” the littlest man tug volunteered.

The place was a flurry of activity as white bathrobes and pink
bunny slippers hurried to and fro.”And what are you going to do, John?” Mother Tugboat asked, staring at me in what I took to be a hostile manner.
“Oh, I thought I’d take a shower.”
“You were supposed to have done that earlier,” she glowered.
“But the bathroom was occupied,” I said, “So I sat out on the porch.”
“THE PORCH!” everyone said in unison, stopping their activities. “There is no porch,” Mother Tugboat said firmly.
“Yes there is . . . it belongs to the hotel,” I replied, “through that door; I sat there watching the taxis.”
“THE TAXIS!” everyone shouted, again in chorus.
“Yes, taxis would arrive, and the people who took them would have to pull the cabs a short way by a rope to get them started.”
“So?”
“So I thought it odd. . . .”
“Why?” Tugboat asked.
“Well … that’s not the way it’s usually done, at least not where I come from.”
“If you just get in you have to pay full fare,” Tugboat explained. “But if you pull the taxi to get the engine started you get to pay a much lower rate, it saves the battery.”
“Oh, I see, kind of like those ‘early bird dinners’ everyone eats down here,” I said. “I guess everyone living in Florida is out to save money.”
“But we’re not in Florida now, were in New Jersey,” Mother Tugboat declared with a dismissive wave of her hand.
“New Jersey!” I exclaimed.
“Yes . . . New Jersey.”
“How did we get to New Jersey? . . .”

The bustle in the kitchen had resumed; a clanging of pots and pans. And from the basement, garage, and roof came the sounds of male tugs hammering and sawing. I was lost at sea in a storm. My mind told me I was supposed to be feeling guilty, but I did not. I lifted up my armpit and sniffed; I did smell bad.

Seeing my gesture, a middle-sized female tug sailed up to me and announced: “I’m going to take a shower now.” Opening up her white robe, she flashed her naked body at my startled eyes. “Would you like to join me?” she said with a wink.
“Oh, are we still in New Jersey?” I asked, not knowing what else to say.
“Does it make a difference where we are,” she replied with a smile.
“I think I’ll just go sit on the porch until dinner,” I said, pushing open the door to the porch, but there was no porch there, only a sidewalk and a parking lot.

This is our 14th edition