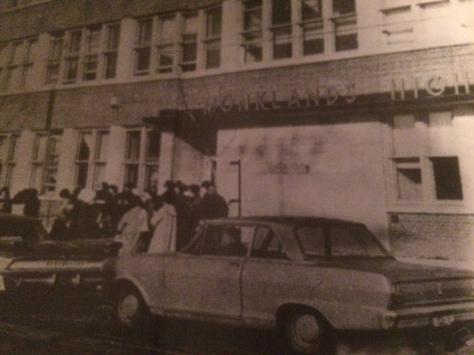 When you’re a child, you’ll believe anything—that Santa Claus has a giant warehouse of wrapping paper so his gifts match the ones at your house, that parents are infallible, and even that school is a haven for clever students.

The mile between Rhonda’s home and school had grown longer as autumn progressed. The maples that stood like sentries along the grounds of the state hospital were bare now, and a fragrant detour into the crunchy windrows of leaves added five minutes to the daily journey. The less pleasant reason for dawdling appeared beyond the last maple—the swarming migration of students into squat, red-brick Lafayette Junior High.

Rhonda waited at the crosswalk, wishing the light would never change, knowing it would. She eyed the sign plastered to the lamppost, “Nixon, Now More than Ever,” and smoothed down a curled edge. The first bell rang; the light changed.

Time to run the gauntlet.

A purposeful jog was best even on those days she arrived with time to spare. It took her past the students who smoked behind the batting cages and the couples who lingered behind the plane tree. She spied Jake in his usual post next to the dumpster, stubby finger extending toward her, one side of his mouth hitched in a smirk. They both knew he could outrun her; he had been able to since elementary school. And he did again today, his hand on her back, searching, clawing.

“Holy nothingness, Batman!” he crowed, dashing past her and up the steps. “No strap, no snap.”

Patrice and Teresa lounged at the base of the steps.

“If you get a bra, he’ll leave you alone,” Teresa said. She drew a lock of hair between her fingertips, examining it for split ends. “Or a boyfriend. Do you have a boyfriend?”

“They don’t make bras for … that,” Patrice said, drawing a sideways figure eight in the air. “Or boyfriends, either.”

They rose, preened, tugged their bra straps into place, and sauntered into school.

Rhonda hoisted her book bag and silently disagreed; wearing a bra would, in fact, encourage Jake to greater displays of public humiliation. Second bell rang, and she ran up limestone steps whose sharp edges had been worn down by generations of students.

She was late to homeroom.

By world history class, she had caught her breath. Mr. Brant’s room was stifling, as it had been every day since the start of school. The windows were closed. The vent of the heating unit fluttered with torn strips of toilet paper.

“Take your seats, ladies and gentlemen,” Mr. Brant said. “Yes, it is hot in here. I have supplied you with a useful diversion.”
He pointed to the heater. Rhonda slid behind her desk and calculated how many square inches of toilet paper he had used. Then she estimated how long it would have taken him to affix the dozens of torn pieces to the vent.

“You cannot see air move, but you can see its effect. Behold its effect!” he said, brushing his fingers atop the waving field of white. “If you know that the air is moving, you will feel cooler.”

She was about to raise her hand to ask if the subconscious mind would be fooled if the conscious mind was aware of the gimmick when he unclipped the modish floral tie from his shirt, lifted it to his face, and blotted perspiration away with it. “My wife and daughters bought me this. But a necktie this wide is, in fact, simply a handkerchief. If anyone here knows who constitutes the committee of my surprise retirement party, please share that information with them.”

Patrice and Teresa entered the room and took their assigned seats on either side of Rhonda.

“Misses Schwartz and Pierotti, you are late,” he said. “Take out a sheet of paper and number it one to ten,” he said.

“Today’s quiz will be multiple choice.”

“How predictable, Mr. Barone,” Mr. Brant said. “Miss Brown, would you be so kind?”

Rhonda took a second sheet of paper from her notebook and passed it to the student in front of her, who whispered, “For every question he reads, give me the answer. One kick is A, two kicks is B, three kicks is C …”

Mr. Brant cleared his throat. “Number one: The Fertile Crescent of ancient Mesopotamia lies between which rivers? A. The Schuylkill and the Delaware. B. The Mississippi and the Missouri. C. The Tigris and the Euphrates. D. The Simon and the Garfunkel.”

Rhonda watched the boy in front of her write an answer, erase it, and write again. She rolled her eyes. He was still changing answers when it was time to pass their papers forward.

After the quiz, Mr. Brant sent a half-dozen students to write homework on the board. Teresa made a hissing sound. She had a small, tightly folded triangle of paper.

“Pass it,” she said, indicating Patrice with her chin.

Heart racing, throat dry, Rhonda checked to be sure that Mr. Brant was engrossed in correcting one of the students at the board. She snatched the paper and furtively placed it on Patrice’s desk. Her cheeks burned, and she hoped Mr. Brant would call on Patrice before she could compose a response and ask Rhonda to pass it back. This was the détente the three of them had reached: Patrice and Teresa would limit their note-passing to times when Mr. Brant’s back was turned; Rhonda would pass the notes; and there would be no repeats of the day when Patrice and Teresa had tossed the paper triangles over Rhonda’s head.

When first period was over, Teresa asked, “So do you have a boyfriend or not?”

Rhonda crossed her fingers behind her back and asked a silent pardon of her favorite cousin for deploying him as her makeshift admirer.

Protected by the lie, Rhonda relaxed. The rest of the morning would be easy; Patrice and Teresa didn’t take the same science class as she did, and they usually ditched chorus.
In the bustle of lunch, she and her friends had achieved happy anonymity. She sat with Holly, the gangly redhead with glasses and orthopedic oxfords, Deb, the heaviest girl in the seventh grade, and Sherry, who came from the poorest part of town. Rhonda and Holly chose cheese dreams. Deb had a chef’s salad. Sherry brought lunch from home. For dessert, Rhonda and Deb shared an ice cream bar—Rhonda slid crunchy chocolate shards from the outside and ate them, and Deb had the rest.

Rhonda always wondered why swimming class was scheduled right after lunch. So far, no one had succumbed to a postprandial cramp and drowned, but some of the parents must have believed in old wives’ tales, and it seemed wise for the school board to mollify their fears. Swimming was her only sport; school had made her loathe it. She entered the locker room as the bell sounded, chlorine and mildew tickling her nose. Sherry had beaten everyone there, arriving in time to choose one of blue bathing suits provided by the school. Everyone avoided the red ones at all cost; they were rendered see-through by contact with water. Deb wasn’t there. She had a permanent excuse from her doctor.

Holly and Rhonda took to a corner, shucking their clothes surreptitiously. Rhonda had not worn anything under the top her grandmother had sewn for her, had no need to. Her nipples had barely begun to stir and swell, and the breasts beneath them still slumbered.

She was ecstatic on her birthday when her mother handed her a box that, unwrapped, revealed a three-pack of garments labeled as training bras. Rhonda had rushed to her bedroom and torn back the plastic with trembling fingers. Her traitorous eyes fell on the reversed letters under the label—camisole. She tried one of them on, appraised herself in the mirror, and saw nothing more than a child in a cut-off undershirt. For her mother’s sake, she wore one on weekends, but she wouldn’t expose herself to the peril of wearing it to school.

Patrice, Teresa, and the other girls who were bounding through puberty always stripped in the center of the locker room, striking poses that displayed their blossoming breasts and interesting tufts of hair, lounging like odalisques before wriggling into their bathing suits.

“Yo, Rhonda,” she said, striding towards them. She stood there with one fist planted on her hip and cocked her head. Patrice followed.

“I talked to Lisa Martin at lunch. Glenn Rogers, two n’s, no d? Your boyfriend at DeKalb? Did you know he’s seeing someone else? She’s a friend of Lisa’s—Annemarie Angelucci. We’re calling Annemarie after school to tell her to break up with him. We think you should break up with him, too.”

Rhonda came to her feet. Sherry rose next and then Holly. Rhonda dropped a swim towel on her friend’s right foot.

“What a flake!” Patrice said.

“Even you deserve better than that,” Teresa said, turning to leave.

A faint noise squeaked up Rhonda’s throat. “Wait,” she said. Drops of water in the nearest shower stall measured the painful, hushed moments. “Glenn is my cousin. Please don’t get him in trouble with Annemarie.”

“I wanted you to think I had a boyfriend.”

Patrice said, “See? Told you no one would be interested in that.”

They walked to the mirrors, caught the elbows of some other girls, and leaned in confidentially to talk to them. The others turned to look at Rhonda.

If she’d been a child, Rhonda reflected as she walked to the edge of the pool, she would have believed that her confession would assure her return to the ranks of the happily anonymous at Lafayette. But she knew better. She dove into the pool, swam to the middle of the deep end, and began treading water endlessly, waiting for the body of a girl to catch up with the mind of a young woman.