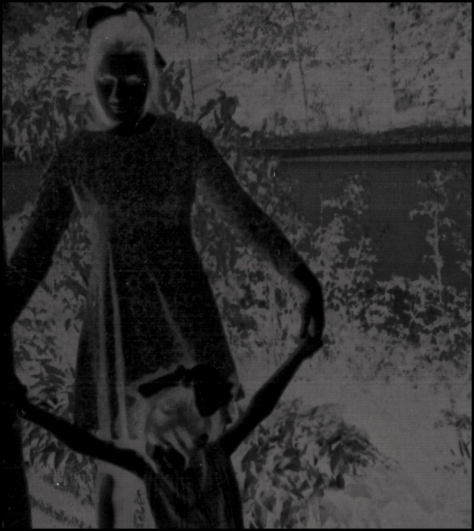 In our neighborhood, the electricity dies at night.  On those evenings—the blackouts—my father holds a flashlight, and he and I walk out the front door of our house, into the yard, to a shed—inside, a generator.  When I press the switch, the generator howls.  The house is floodlit again, and the silhouette of my mother, eight months pregnant, presses against the balcony window, her stomach reaching against electric light.

Around the yard is a high wall and an iron gate; beyond, night collapses.  Mosquitos thread the humidity in the kind of space and time that gnaws on the imagination.  It is the end of April, and as my father and I sit in the yard, he tells me he’s going to have to leave soon, for work.  He tells me to help my mother while he’s gone.

When I go to sleep that night, I see Liberia’s coasts, the beaches where my father takes Sarah, my older sister, and me, on Sundays.  I see dunes—round, full, expectant—as if something waits beneath the sand.  The beaches curl north, curl south, and both ends reach their respective horizons.

In May, my father leaves.  My mother will pick Sarah and me up from school.  The school is one room.  Inside, we sit at a table; Sarah draws and I write.  The afternoon passes without us seeing it go; as the sun steps behind the mangrove trees, our teacher takes us to my mother, waiting outside, in the car.  Sarah points to my mother’s stomach as it grasps the steering wheel.  She asks if our little sister kicks.  My mother says sometimes.  Feel.  She holds Sarah’s hand against her stomach.

When will she be born, I ask.

We go to the market in Monrovia.  Women walk with pots balanced on their heads.  Naked children sit on their mother’s laps.  Men stand behind tables, holding up baskets of fruit.

Sarah and I walk behind my mother.  We watch people yell at her, telling her to buy things.  She buys cassava and shoves it into a cloth bag.  We walk back to the car, and inside my mother breathes in, as if shivering.  She puts her hands on her stomach and her breathing softens.  Sarah and I don’t say anything.  My mother puts on her seatbelt.  Let’s go home, she says, frowning.  Hopefully, the electricity will stay on tonight.

I think then of walking next to my father, of holding the flashlight, of seeing the house lit like fire.  I look at my mother.  Mom, if the lights go out, can I go outside and turn on the generator.  My mother smiles.

All week, after school, Sarah and I play in the yard.  Fruit has bloomed in the trees, and we throw rocks, trying to hit coconuts between the palms so that one will fall to the ground.  Musu, who works in the house, watches Sarah and me while my mother runs errands.  Musu tells us to be careful throwing rocks.

A man stands outside the gate.  His name is David.  He stands there every day.  My parents tell us that David is there to guard the house.  When Sarah leaves with Musu, I walk to the gate and wave to David.  David waves back.  Another man passes outside.  He talks to David and I listen.  Later, my mother comes home, and she calls me into the kitchen.  Sarah sits at the table, eating, and my mother asks me to wash my hands.  As I put my hands beneath the water, I tell her I that saw David.  My mother says that’s nice.

I sit down at the table.  Mom, what’s Malaria?

My mother puts a plate in front of me.  She says eat your dinner, then she leaves the kitchen.

The next day, at school, I think about the week ending, about my father coming home the week after.  When the school day ends, our teacher takes Sarah in one hand and me in the other and walks us to the car, opening the door for us.  We get in, and Sarah lifts up a piece of paper from school, a drawing.  Sarah presses the drawing against the windshield.  Over her shoulder, I can see water dotted in blue crayon against the brown of sand.  Sarah tells my mother it’s a picture of the beach.  But my mother doesn’t hear her; she is listening to my teacher who stands against the car door, frowning and whispering.  Sarah pushes her picture toward my mother, but my mother moves it away, accidentally tearing the paper.  My mother leans closer to my teacher; my teacher whispers again then shuts the door.

Sarah points at my mother’s stomach.  She asks if our little sister is kicking.  My mother says she isn’t kicking right now.  But Sarah and I know she is.  This time, my mother doesn’t put Sarah’s hand on her stomach; she turns the steering wheel and the car moves sharply.  I watch the road begin the same way: long, curved, leading away from the school.  But it changes into something else, somewhere I haven’t seen.  Sarah asks where we are going.  My mother says your teacher said we couldn’t go home the same way.  Sarah asks why.  My mother says some people are upset.

We drive further, and my mother begins to turn her head left and right.  We turn onto a street between buildings, driving upward.  We slow down, then we stop.  In front of us, I see people, a crowd like at the market.  But there is no market.  I look at my mother.  Her eyes open larger than I have ever seen before.  Then I see the crowd raising their arms, raising their fists into sticks, into rocks.  My mother turns, looks at my sister and me.  Her mouth moves but her voice is missing.  She turns the steering wheel one way then the other but the crowd is too close; they surround the car.  They shout, but I can’t understand what they say.  People press against the windows, blocking the light.  The car begins to tip from one side to the other.  Sarah, my mother, and I sway back and forth.  I hear Sarah cry.  My mother’s hands reach for us.  Her eyes close, her chin presses into her stomach.  In that moment, I wonder again when will my little sister be born?

Eventually, the crowd moves away.  When the car stops shaking, my mother’s hands stay fastened to Sarah and me; the skin on my arm is red beneath her fingers.  My mother rests her head against the steering wheel and her breath moves as if she has run somewhere.  Behind us, the sun falls into the trees, collapsing the day, bringing the night closer.

The following week, I sit in the yard.  My father will be home tonight, so I go to the shed and open the door in case he and I need to turn on the generator.  I sit in the shed and see my mother come out of the house and walk toward the front gate.  I run past her to say hello to David.  When I look outside the gate, the road lays empty.

My mother looks away and says Go get ready for bed.

In the night, I hear my father come home.  I turn beneath my blanket and listen for his voice, humming through the bedroom walls.  Then I hear my mother say something much louder.  Her voice rings in a way I recognize—crying.  I press my ear into the mattress, listening to muffled space.  If my father is home, I wonder why my mother cries.  Maybe she is very happy.  Or maybe she doesn’t like the lights going out all the time.  I hear her voice again, this time in the hallway, clear: you work too damn much, she says.  My father answers: well, we’ll have to leave anyway.  You and I know what’s coming.  This President is just another dictator.

I open the door to my room and walk to the balcony window.  I look into the darkness beyond the gate.  Although I can’t see the coast, I pretend that I can.  I pretend to see the dunes, the beaches reaching into the horizon.

At the end of the week, my parents tell me they are going to visit the doctor.  My mother says she is going for a checkup because my little sister will be born very soon.  Sarah goes with them, but I stay home with Musu to play in the yard.  There, I walk by myself between the coconut trees.  I swing my arms, flinging rocks into the palms, getting closer to the hanging fruit.  One rock curves away and falls on the other side of the wall.

I hear it then, for the first time, outside: something thick—shoes hitting the road.  I wonder if it’s David, so I go to the gate.  I see another man.  His clothing is dark green and his eyes are hidden by black glasses, like the men who sometimes stand on the roads when we drive, who look into the car when we pass.  Something hangs on his back, something long, pointed, metal.  He puts his hands against the gate.  His fingers choke the bars.  His teeth move quickly.  You hit me, he says.

I run past the generator, through the front door, up the stairs.  In my parent’s bedroom, I crawl beneath the bed.  I hear the gate shake.  Musu comes into the room.  She kneels at the bed.  I whisper to her.  She presses her hand against her mouth.  She stands, walks in circles.  A soldier, a soldier, she says.  I put my hands over my ears.  Musu runs downstairs.  I stay, stay until the day no longer forms in the windows, stay until the gate no longer shakes.  I watch the lamp lit on my parent’s bedroom table.  I see the flashlight, lying next to it.  I see the lamp go out, watch all the light in the house extinguished—a black-out.

Soon, I hear my mother and father come home.  I go downstairs.  My father and Musu are talking outside.  My mother is in the kitchen, and when she sees me, she runs towards me, circling her arms around my head and pulling me against her.  I try and move away, but she holds me there, kissing my forehead.  I turn my face, and suddenly my ear is against her stomach.  I stop moving; for an instant, I hear it—the sound you hear when swimming in the ocean, the sounds above the surface trying to reach you, as if the water itself was speaking.  I hear her then, for the first time—my little unborn sister.  I hear her.  I turn to face her.  In a whisper, I say Don’t come out, yet.  Don’t come out.

My mother lets go, and I step away from her.  I hold up the flashlight.  I’ll start the generator, I say.