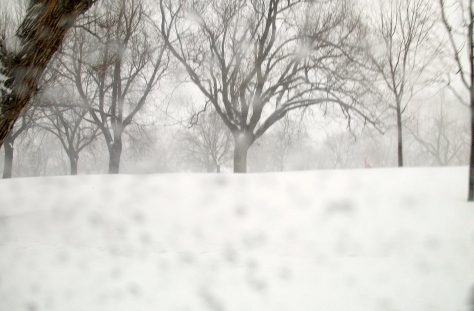 I was thirty the first time I saw vehicle snow chains, a necessary part of my new life in northern British Columbia. For thirteen years I’d been a city driver, confidently navigating my way through the traffic maze of Australia’s largest city, Sydney. Ice scrapers, block heaters, lock de-icers and snow chains were not a part of my life. But all that changed when I moved half way around the world to a small cabin at Moberly Lake, more than a thousand kilometres north of Vancouver.

I spent many weekdays alone at the cabin. The closest neighbours lived a few kilometres away; the small town of Chetwynd was a twenty-minute drive south. One winter morning I planned to visit a new friend in town, so pulled on extra layers and Mukluk’s and waded through freshly fallen snow to the two-wheel drive truck. After some worry and a few wheel spinning efforts I knew I was snow-bound. I simply could have returned to the cabin and phoned my friend to let her know I was marooned until the driveway was ploughed. She’d understand; weather often altered plans in the north. But I was hungry for company; a new-comer with too much time on her hands feeling frustrated at the bottom of a long driveway. I pulled the tire chains from behind the bench seat and my ready-for-anything snow pants, suited up and wriggled under the rear wheels of the pick-up. I’d been shown how to fit chains a few weeks earlier and knew it could be awkward. But it wasn’t rocket science.

Like most Aussies, I hadn’t grown up with snow. Summer or winter, my backyard was green and the eucalypts in our garden and street were always in leaf. During crisp winter mornings, frost collected on the lawn and in rare summer hailstorms ice stones briefly blanketed the street so it oddly resembled a Christmas card. But it never snowed. The only flakes I grew up with were housed in a small glass dome on a shelf in our living room; one tiny cottage and three tiny evergreens trapped under glass. White flecks swirled in the oily sky when the dome was tilted. Was this anything like real snow?

In my twenties, I set off from summer-time Sydney to experience snow in Britain and Europe. With the temperature hovering in the mid-thirties, I departed from the airport, carrying a knee-length wool coat, wearing thick socks and laced boots. I explored cold London for a few weeks, rain and drizzle but no snow, then ventured northwest in a blue rental Mini to Wales. I woke the following morning in a cozy Cardiff Bed and Breakfast and parted the heavy drapes by my bed. A few inches of snow had fallen overnight. White dominated the landscape; everything looked new and clean. I hadn’t heard a thing. No tell-tale pitter-patter on the roof during the night. No rattle at the window pane. I studied the new view. A downy layer on the lawn and shrubs. The stone fence, dark and mossy under a white crown. A vanilla ice-cream scoop on every fence post. Big white pillows on the roof and bonnet of the Mini. A white strip on the overhead wires. Did snow stick to everything? I thought about driving in these changed conditions. Could an Aussie in a Mini handle it? The B&B owners offered pointers on winter driving, so I ventured out in my first snow to my first medieval castle.

There were few visitors at Caerphilly Castle that day. Mid-week, off-season. After a cautious drive along flat roads, an immense fortress loomed in front of me. Dark stone; tall walls; turrets and towers, most intact and straight, some crumbling or leaning with gaping cracks against the grey winter sky. And fresh snow everywhere. I donned my long wool coat, pulled the hood over my head and left footprints in the snow as I crossed the draw bridge and made my way to the top of the gatehouse. New snow-covered the seven hundred year old structure; milk-white against grey and dark brown and black. I stood alone in a quiet sepia landscape devoid of colour.

I saw snow in other landscapes in the next few years: a tour of Scotland, a beginner’s ski course in Innsbruck, weekend jaunts to the Snowy Mountain seven hours south of my Sydney home. But snow remained a novelty for me, a respite from the mild winters and long, hot summers of Sydney. Then in the eighties I moved to Canada for life with Bryan, a Canadian I’d met travelling, and snow became part of my daily life. I certainly knew snow could be beautiful; it sparkled in sunlight and captured the hues of the rippling Northern Lights. And it was fun; we played in it, skied across it and down it. But snow was work; for seven months of the year, we shovelled and piled it, ploughed, scraped and occasionally cursed it. As a driver, snow tested me. With practice, I learned to read winter road surfaces, to be soft on the brakes and to steer into skids. I came to recognize the bump-bump of a frigid morning drive as the flat spots on the tires rounding out and accepted the need to stow emergency winter gear in the truck.  But my pioneering sense of adventure wore thin that morning, so I grabbed the chains angrily and dragged them in under the vehicle.

I felt warm and cramped under the truck, but my effort with the first chain was working. I fitted and closed the locking levers, then wriggled over to the other wheel. I pulled and tugged a few more minutes, then more success. I crawled out and climbed into the truck, turned over the engine and hollered when the chains bit through the snow and carried the Toyota and me up the driveway and onto the ploughed road. I pulled over and repeated the whole process in reverse. Chains unlocked and off. Snow pants off. Gear stowed. I cooled my flushed face with snow from the roadside, sucked on a ball of it to quench my thirst and settled back into the driver’s seat. I slid on my sunglasses, pushed an Eagles cassette into the player on the dash and drove through the northern landscape to the home of a new friend.

One Saturday a few weeks later, when the temperature warmed to a mild five degrees below zero, Bryan and I decided to top up our water storage tank. The cabin had no running water, so year round we relied on lake water and with careful winter use it could last about a month. A green garden hose snaked up from the tank to the ceiling in the mudroom, passed through the wall, crossed the living room, and dropped through a second wall into the bathroom. The spigot that dangled over the claw-foot tub was the only water source in the cabin. We had no shower. No flushing toilet. No kitchen sink or taps. No hot water tank. But we were comfortable. The big kettle on the gas stove heated kitchen water; an immersion heater designed to prevent livestock water from freezing heated our bath water.

We suited up for our water collecting routine and ran  a Pink Floyd tape to the outside speakers under the eaves on the deck. Bryan disconnected the electric pump from the metal tank and lugged it twenty metres to the frozen lake. He fetched his chain saw and a few tools while I ran an extension cord and another hose from the tank down to the collection spot. About fifteen minutes later, after Bryan cleared snow from the ice, cut an impressive thirty centimetre block from the solid surface and checked all fittings, soft and delicious water ran uphill and into the tank. I checked the kitchen clock. It took about ninety minutes to fill the tank, so we’d need to watch the time.

After the work of set-up we relaxed on the deck with steaming mugs of tea.

“Time to build a snowman,” announced Bryan. “The snow is just right and the steep driveway will be great for this.”

It would be my first snowman. I’d seen cartoon versions of giant snowballs rolling downhill so understood a little what he was thinking. We tested snow quality with small balls rolled on the flat spot near the cabin. They swelled and left widening tracks in the snow. We moved a good distance up the driveway, eager for a massive ball to begin our man of snow. Unwieldy weight defeated us, so we moved closer to the cabin and began rolling again. We worked together to create three impressively large snowballs and maneuvered them close to the picture window in the living room. We laughed, stacked and decorated the balls. I smoothed the big white tummy and carefully shaped the white head. Branch arms grew from our man’s shoulders and spruce-needle hair sprouted from his scalp. Would we be able to find stones for eyes under all the snow?

“Of course he needs a carrot nose,” said Bryan. “Any in the cabin?”

Any carrots in the cabin? Realization hit us at the same moment. How long had we been playing in the snow? We rushed back into the mudroom. Lake water gushed from the storage tank onto the floor. The mudroom, living room and only bedroom were flooded. Shoes floated under the coat rack. Plywood floors and carpet squares were sodden. Bryan yanked the hose from the tank, threw it outside and unplugged the extension cord. One final hiccup of water trickled down the outside of the tank, then all was quiet. We looked at each other and started to giggle. Much of our home was waterlogged. It was mid-winter and below zero outside; and our big new snowman was waiting for his nose. We laughed.

After more work inside and outside the cabin, we shared a bottle of wine by the woodstove in the living room. The pump was back on the tank. The extension cord rolled and stored. Hose drained and coiled. Chain saw and tools stowed. Floors mopped. Soggy rugs hauled outside to freeze and stand guard by the woodpile. We relaxed together on the couch and looked through the picture window at our big man of snow, his carrot nose firmly in place.