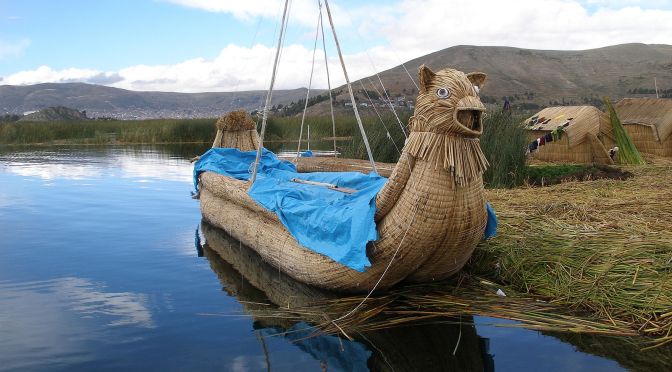 At an elevation of 13,000 feet, Taquile Island sat alone, as if dropped by the gods, in the middle of Lake Titicaca.  Puno, Peru, the closest town, was twenty miles away.  At that time, 1983, several hundred families lived there, all of them Quechua Indians.  Most of the island was covered in terraces that began at the water’s edge and climbed steeply among stone footpaths and scattered huts to the ruins on the mountaintop at its center.  No electricity, no running water, no vehicles.  It took less than an hour to walk across it in any direction.

Xavier, the youngest boy of one of the families, descended a primary footpath to the island’s main well carrying two empty clay jugs by their rope handles.  Like all males on the island, he was dressed in a loose white blouse under a black vest, black pants, sandals, with a wide red sash around his waist.  He wore a red woolen cap that had tasseled earflaps; the flaps were still tied up in the relative warmth of the dwindling late-May day, but later, after nightfall when the temperature fell towards freezing, he’d drop them.  His clothes had been woven by his mother and grandmother; the sash and cap had been knitted by his father.  The sky on the western horizon mixed vermillion with yellow.

The well was a hole between two small boulders on the side of the path.  Another clay jug with a long rope tethered to a stake perched next to it.  Xavier set down his own jugs and lowered the roped-one into the hole until he felt it tip over into the water at the bottom.  When it had filled, he retrieved it and poured it into one of his jugs, then repeated the sequence until both of those were filled.  Next, he stood and hoisted them to his side where their heaviness dangled almost to the ground.  He began the climb back to where his family lived near the mountaintop.  He was perhaps nine-years old.  On his way, he passed several other children with empty jugs of their own.

At that same time, his sister was on the other side of the island collecting firewood, sticks and thin branches, in a shawl slung over her shoulders, a load that would become nearly as big as her.  Her twin brother had gone to bring in the family’s sheep; the two of them were a few years older than Xavier.  They’d all left the family work project they’d been helping with that day: the construction of a new hut.  It was for their older sister, Maria, who was in her late teens, and Diego, the boy she’d just married.

The sheep that Xavier’s brother followed were small, black and white.  All of them had red and blue ribbons strung through one of their ears.  Most of the bigger ones also had a front and rear leg tied loosely together to keep them from trying to scamper away; they moved awkwardly and sometimes slipped momentarily over the edge of the terraced pathway.  The sun inched lower, and it began to grow colder.  The dim shapes of slowly moving cows were visible in some terraces, as were other residents completing the same tasks along the pathways.  Here and there across the mountainside, fires and candlelight began to dot the interiors of huts.

Xavier was the first to arrive back at the terrace just below his family’s where three sides of the new hut had already been assembled in a cleared patch beside two scraggly manzanita trees.  Long shadows covered the final wall that his father and Diego had started building with adobe bricks.  In their black dresses, his mother and Maria were using rectangular wooden molds to form new bricks, which they added to the rows they’d set aside to dry.  A mark at the hem of Maria’s dress showed where the embroidered flower indicating unmarried status had recently been removed.  No one spoke.

Xavier set down his jugs, then reclaimed his place in what was left of the pit they’d been digging and irrigating all day.  He used the spade next to it to break up several new feet of earth, poured water over the spot, kicked off his sandals, and began stomping again on the thick mud he created.  His mother came over and squatted next where he stomped.  She used her hands to scoop mud into her mold and mixed it with bits of straw from a pile next to her.  She shook and turned the mold until the wetted mixture hardly moved.  Then she carried the mold over to the collection of stiffening bricks near the new hut, carefully flipped it over, shook out the new brick, and turned it on one of its short sides to dry.  Maria was turning over other bricks that had stiffened adequately so their remaining sides would dry.  The dark, wet bricks that had first come out of the molds turned a pinkish, chalky color as they hardened.

Diego set a dry brick for the new wall in the next spot Xavier’s father had lined with wet mud mixed with straw, then tapped and straightened it into place with the heel of his hand.  They coated both sides of the new brick and its seams with more wet mud and straw, smoothing the surface with their palms.  The walls at their highest point stood short of six feet, but were taller than each of them.

The family continued to work as light fell further towards gloaming.  Eventually, Xavier’s younger sister, bent under her load, came down a path and dumped her firewood outside their hut’s open door, then joined him in the stomping pit.  Their grandmother came out of the hut and gathered a few scraps of wood for the fire inside that was cooking their dinner of vegetables simmering in a pot.

When the sky on the western horizon had become the color of a bruise, Xavier’s father shouted once, and as they all looked at him, made an “X” with his arms.  They stopped working.  Xavier’s brother was just coming over the nearest rise, his sheep’s cloven hooves clicking softly on the stones, and his father went to help with corralling them.  Xavier’s mother used water from a jug to wash the bottoms of his legs and feet, as well as his sister’s and her own hands, then the three of them walked up to their hut.  Maria and Diego stepped inside the three walls of their new home, looked around it, and embraced briefly before Diego went off to his own family’s hut several terraces away and Maria followed her family into theirs.  Xavier’s father and brother were the last to enter the hut where his grandmother was passing out clay bowls of soup and hunks of brown bread for dinner.  The fire and candles inside provided just enough light to show their faces where they sat on the earth floor and began to eat.

I opened my rucksack, took out a plastic bag of trail mix, an orange, a partially eaten chocolate bar, and the water bottle I’d brought with me on the boat from Puno that morning and began to eat, too.  I was hidden behind a clump of brush under another twisted manzanita tree perhaps twenty yards away and a little higher up the mountainside.  From there, I had a clear vista of their hut, the one they’d been building, and most of that side of the island all the way to the water’s edge at the eastern end where a full moon was just rising.  It threw a cone of shimmering silver across the dark surface of the lake.  I’d walked most of the island earlier that day after arriving on the boat, and then settled into my spot in the middle of the afternoon and began watching the family.  Around that same time, I saw the boat leave on its single daily return trip to Puno.  It was just an old converted fishing boat with benches built into the back for a dozen or so passengers; if they missed me or were concerned about my not being on the return voyage, I had no way of knowing.  I hadn’t asked if there were regulations preventing visitors from staying the night.

While I ate and watched the family finish their meal, I thought about things.  I’d only been able to make out Xavier’s, Maria’s, and Diego’s names when they’d responded to the father’s specific directions to them, but I wondered what the other family members’ names might be.  I thought about the lives they’d fashioned there together, their simple rhythms, their history, their future.  I thought about Maria and Diego’s new life together as a couple and of the woman back home in Juneau I was no longer certain I loved.  I thought about taking the boat back to Puno that next afternoon, the bus to Lima the following day, and then the plane home ending my summer’s travels where she’d be waiting to pick me up at the airport.  I thought about our own embrace there, of returning to our apartment, about starting another term at the elementary school where I taught.  She worked as a graphic artist.  We were both twenty-eight and had been together for two years.

Full darkness had almost fallen when Xavier and his younger sister came outside the hut carrying the family’s empty bowls.  They used water from a jug to clean the bowls, shook them, and leaned them against the hut on a mat just outside the door. Next to them were the beans, carrots, and onions their grandmother had harvested earlier and sprinkled into a kind of carpet.  While they worked, those inside the hut blew out candles, spread similar mats, and begin stretching out on them under thick woollen blankets.  The mother and father moved into the darkness of the farthest corner, the grandmother next to what was left of the fire, and Maria and the brother to opposite sides of the hut.  I pulled my down sleeping bag out of my rucksack, unrolled it, and climbed into it, too, but stayed sitting up.  A small, cold breeze lifted the acrid smell of collective fires.

Xavier’s sister went back into the hut and crawled under the blanket next to Maria.  Before he went inside himself, Xavier lowered the flaps of his cap over his ears and tied its tassels under his chin.  In the moonlight, his breath came in short clouds.  He looked around him, then his gaze went up to the stars overhead, a canopy so vast it seemed impossible.  From a hut down the mountainside, the notes of a wooden flute broke the silence, a lonely, lovely sound.  For several moments, Xavier stood still, listening,  Finally, he went inside and curled up under the blanket next to his brother.  I lay down then myself, listened to the flute’s mournful song, and waited for sleep to come.